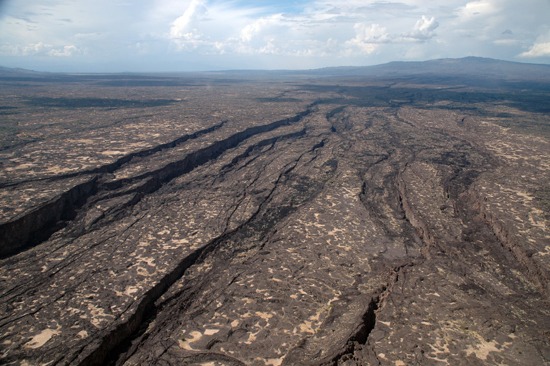 Formation of a new ocean on the African continent


The destiny of the African continent within a few million years

The creation of a new ocean, and a new continent

Today, we are talking about an event that is happening, literally under our feet, and will not be visible until 5 to 10 million years from now: The creation of a new ocean on the blue planet.

In Africa, in the middle of the Ethiopian desert, in the Afar region, a giant 56 kilometre long fracture suddenly opened in 2005. This fracture is visible on the surface of the Earth’s crust and reminds us that the tectonic plates are active and quite intense. Indeed, this fracture was caused by the separation of three tectonic plates (the African Nubian Plate to the northwest, the Somali Plate to the southwest and the Arabian Plate to the east), this area is then called the “Afar Triple Junction”.

This crack in Afar proves that the rifting process does not necessarily take place slowly and constantly. The upward movement of magma would have caused an increase in pressure in the Earth’s crust, thus causing a rupture.

It was mainly due to these tectonic plate movements that the Red Sea and the Gulf of Aden have appeared.

The tectonic plates involved in the fate of the African continent have been widely studied for several decades. It has been shown that in a few million years (5 to 10 million), Africa will split in two to form both a new ocean and a new continent. This phenomenon will mark the end of the unbearable heat rises that the region which has been nicknamed “Dante’s Hell”.

A new ocean means new species of corals, fish and other organisms that will, who knows, populate our aquariums of the future.