Planktovie / Our blog  / The nitrogen cycle 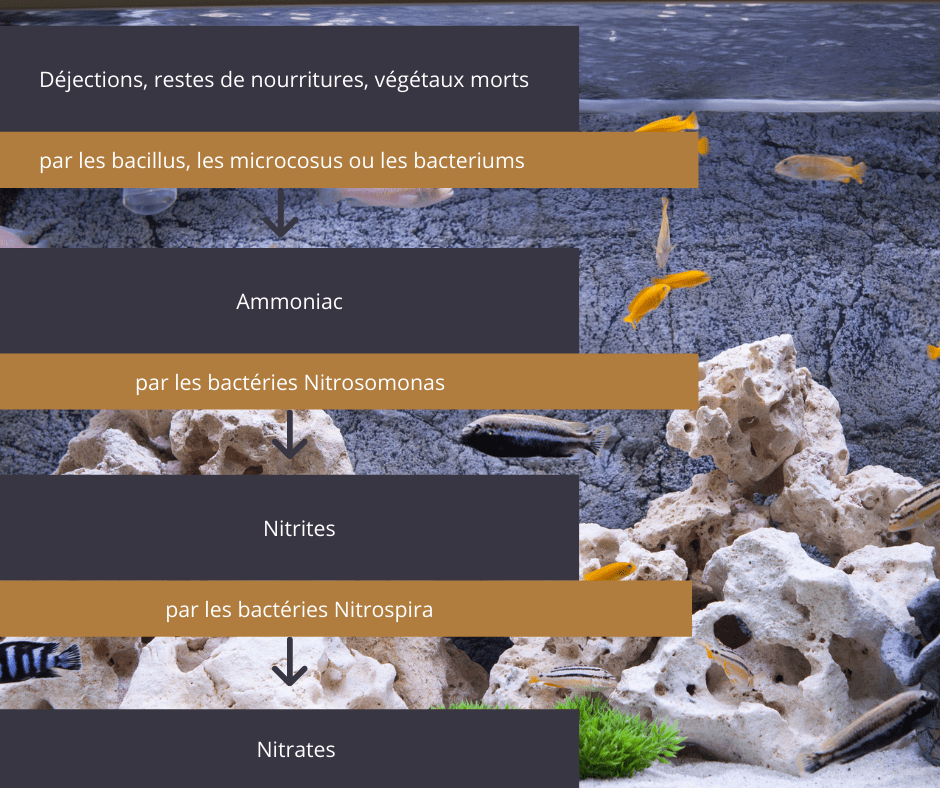 
The nitrogen cycle is a very important parameter in the proper functioning of an aquarium.

Fish produce an important quantity of organic waste including ammonia through their perspiration, urine, food remains etc… This ammonia can be toxic for the species.
This is when the nitrogen cycle takes its importance, it represents the change of ammonia into nitrates much less toxic.

The transformation goes through several stages:

– Organic waste into ammonia : The waste is gradually degraded by micro-organisms. These micro-organisms are composed of different aerobic bacteria such as bacillus, microcosus or bacterium. In basic water (high pH) the waste turns into ammonia, and in acidic water (low pH) the waste turns into ammonium. So it is preferable that ammonization is done in acidic water, because ammonium is not very toxic and plants can assimilate it unlike ammonia which is very toxic to fish.

– Ammonia to nitrite by Nitrosomonas bacteria : Ammonia compounds are in turn transformed by other aerobic bacteria called nitrifying bacteria. Ammonium and ammonia are first transformed by bacteria such as nitrosomonas. At this stage we obtain nitrites.

– The nitrites are converted into nitrates by the bacteria Nitrospira : The nitrites thus obtained will be transformed by new aerobic bacteria such as nitrobacters. This ultimately gives us nitrates.

All these transformations take place constantly and form a loop, hence the name nitrogen cycle.

There is the syndrome of the new tank, this phenomenon takes place at the time of welcoming inhabitants in an aquarium. Indeed, when the aquarium is empty, the nitrogen cycle cannot develop. This is why we advise you to start the aquarium 4 weeks to 2 months before introducing your fish and other aquatic animals. Once the aquarium is set up alone, wait 3 to 4 weeks, then check the ammonia and nitrite levels. Make sure they are at their lowest before introducing fish into your aquarium and wait a few more weeks if necessary. This will help your fish acclimatize to the new environment.

To evaluate this nitrogen cycle, there are many products to help you such as tests for ammonia, nitrites but also nitrates.

Link to find our tests: