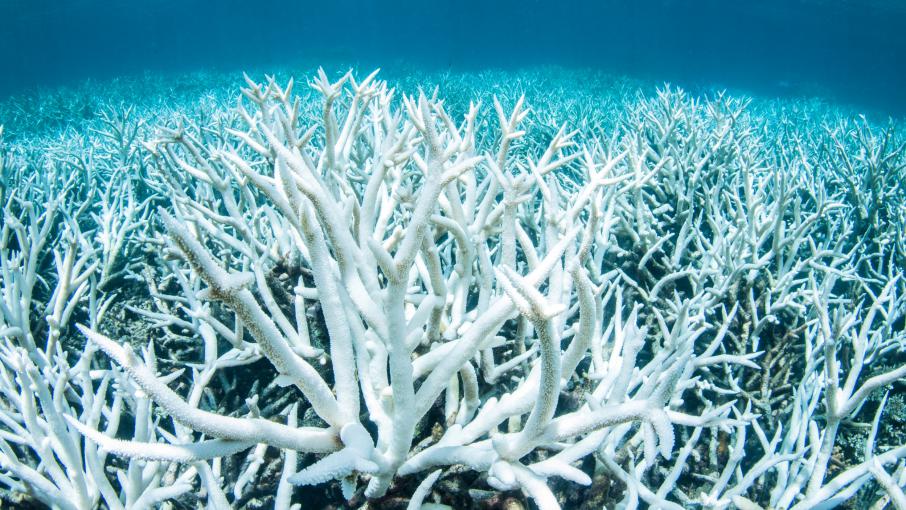 Selection of resistant zooxanthellae to counter the effects of climate change


Assisted evolution explorations to increase the thermal tolerance of corals

Today, we wish to highlight the sad reality around coral reefs. Why and how do they die? Are there ways to reduce this mortality and what is the state of research on this subject?

As we know, coral reefs have a major role in coastal protection (reducing erosion and damage during storms, hurricanes etc.), but also and most importantly, they are home to 25% of all marine life. In addition, 80% of species have to pass through the reefs to ensure their development.

Unfortunately today, more than 29% of coral reefs are already dead. Coral populations have deteriorated globally over the last three decades, due to marine heat waves linked to climate change. The Great Barrier Reef has already been halved (especially during the heat waves in 2016 and 2017), and coral larvae have decreased by 89% in 2018. But how does rising temperatures explain coral mortality?

Corals live in symbiosis with a type of dinoflagellate, microalgae called zooxanthellae. They live in coral tissue and provide corals with essential nutrients through photosynthesis (by synthesizing the sun’s energy into organic matter). In exchange, the microalgae feed on the carbon dioxide released by the corals. This is what happens when ocean temperatures remain stable. However, during major heat episodes, when the water temperature becomes too warm, the zooxanthellae stop photosynthesis. The corals then no longer recognize these microalgae as allies but as invading microorganisms and eventually expel them. The coral then becomes translucent and hungry. This is called coral bleaching, which can reach phenomenal proportions on the scale of the entire reef ecosystem. If this continues, scientists estimate that in less than 30 years, all the world’s coral reefs will be gone.

A great deal of research has been done on this subject, including explorations of assisted evolution aimed at increasing the temperature tolerance of corals, thereby reducing the incidence of coral bleaching.

Indeed, researchers have experimented by exposing clonal strains of reef-building coral to high temperatures (31°C°) for 4 years in the laboratory (equivalent to 120 asexual generations) and comparing them to wild strains maintained at 27°C for 4 years as well. It has been shown that the thermal tolerance of the algae in vitro increases over only 40 asexual generations by exposure to high temperatures. This tolerance depends on the physiological tolerance of the associated dinoflagellates.

Thus, assisted evolutionary approaches such as this one, aimed at increasing the thermal tolerance of corals, may contribute to the survival of coral reefs until global warming is stopped, as coral bleaching is a reversible situation if conditions become favourable again.

Climate change has shown its capacity to wipe out entire ecosystems almost overnight. We would like to recall the importance of corals that have enabled life in the oceans to evolve. Their disappearance could cause the bio-hierarchy of the planet to slip and lead to numerous mass extinctions. We all have a role to play in slowing down, even stopping everything that contributes to this accelerated rise in temperatures. We like to think that it is never too late, and that our actions, if carried out together, will contribute to the preservation of ecosystems, or else the last corals left on earth will be those in our aquariums.