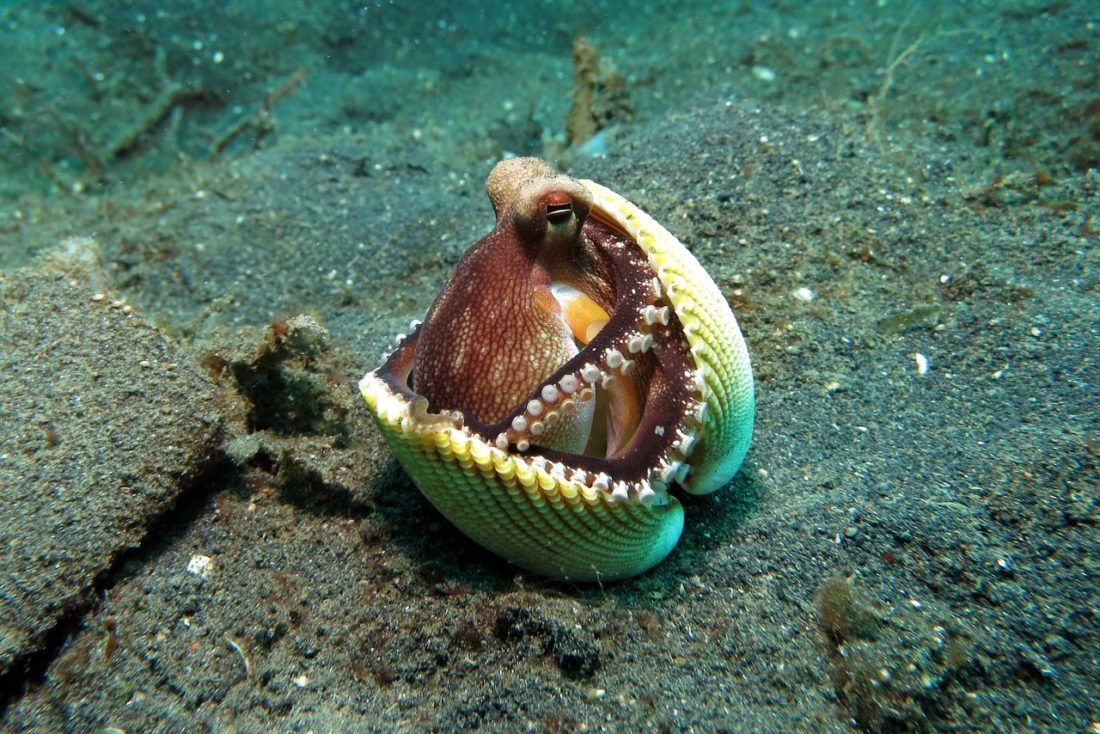 
The octopus and its peculiarities

The octopus has long been studied for its intelligence thanks to its nervous system of more than 50 million neurons like a dog. Octopuses have a central brain but also peripheral brains in each arm.
It is composed of 8 arms allowing to detect movements in space, to feel textures. All contain suction cups to catch objects or organisms.
In total, the octopus requires 9 brains and 3 hearts. Its blood turns blue thanks to hemocyanin, a protein based on copper and not iron to transport oxygen.

This animal has been used for several successful experiments: opening a glass jar, standing in labyrinths but also predicting the outcome of the 2010 World Cup with Paul the octopus.

According to scientists, octopuses meet each other, know how to communicate, build their nests, hunt their fellow creatures.
Endowed with a real talent for camouflage, the octopus changes color and even shape for some species to avoid predators or to feed.
It can also throw an ink jet to escape predators.

To feed, it uses its arms to capture its prey, insert a venom that paralyzes them and its beak to tear them apart.
It consumes crustacean larvae as a juvenile but as an adult it prefers shrimp, crabs, fish, snails etc…

Sedentary and very home-like, the octopus lives in the seabed, hidden in a rock, waiting for dusk, the beginning of the daily hunting season.

The octopus lives one to four years depending on its species and reproduces only once. They reproduce then the female will then take refuge in a closed den, protecting and ventilating her eggs by blowing water over them. She ventilates her eggs until they hatch, which can take several weeks to several months depending on the species and water temperature. During all this period, the female does not feed anymore. Thus after the eggs hatch, the female octopus, emptied of her energy, no longer has the strength to defend herself from predators. Thus, even small carnivorous fish that were fleeing her until then, attack her to death. The males do not take care of their offspring, so there is no transmission of knowledge from one generation to the next. The young octopuses learn to camouflage themselves, to imitate the environment around them through observation. In their old age, the males become senile.